On 28th May Twitter and GenArt Media held “Turkey Twitter Day” in Bilgi University Santralistanbul Campus. We found an opportunity to interview with Ali Jafari, Twitter Sales Operation Director, during lunch time. This is Jafari’s 3rd visit to Turkey. He said that they host him so well that it feels like a vacations more than a business visit. But even though it feels like a vacation to him he initiates that Turkey is a very important market for them. “The one that we look at and prioritize highly” said Jafari and added: “As I know it’s over a billion TL (Turkish Lira) of revenue for digital advertising. This is a big opportunity for everyone.”

Twitter signed a partnership with GenArt Media regarding the sales operations for Twitter advertising tools in Turkey on December 2012. One of the recent tools that Twitter has launched is ‘Keyword Marketing’ which is very attractive and interesting for Turkish marketers “It’s the first time that marketers can actually target a specific conversation says Jafari.

I have been with Twitter since March 2011. A little bit more than 2 years.

What has changed in these 2 years?

When I joined the company we were a few hundred employees and now we are well over 1000 employees.  We’ve seen similar growth in other areas too. We used to have presence only in the US as offices. We didn’t have international presence. Since then we have launched in UK, Japan, Latin America, Europe etc. UK office was opened in 2011 and Japan office was opened around at the same time. 2012 was the year that we really expanded internationally. We have done partnerships similar with the GenArt Media in Turkey.  In 18 months I got the opportunity to visit over 20 countries and participate the process of lighting up those markets and launching Twitter’s ad products.

You have seen the whole markets apparently. Which market is the hottest for Twitter?

The way that I think about this question is how quickly the users are growing. That’s the best measure I guess. And we see that users are doubled year a year in most markets. That’s great. It means that the popularity expands on the markets outside of the US. Turkey in particular is an interesting market for us. The one that we look at and prioritize highly. 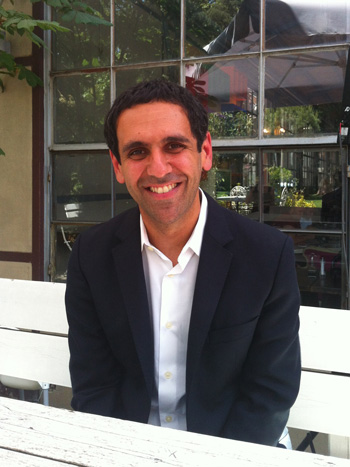 One is usage. Usage is high here relative to other markets. The second is… There are two metrics that we look at. First one is; how many people use Twitter? Second metric is what percentage of the overall internet population use Twitter? Both numbers are high here. Besides, Turkey has a big ad market. As I know it’s over a billion TL (Turkish Lira) of revenue for digital advertising. Facebook has a presence here. Google has a presence here.

So you do partnerships when you go to a new market and you have partnership with GenArt Media here. You are into local partnerships…

We did a partnership with GenArt Media on December 2012 on selling Twitter products. We held a launch event. We think this as an extension of our sales team. They hire dedicated Twitter people. They do nothing but sell twitter. We train them as if they are our own employees. We bring them to our Head Quarters and train them and give them access to same tools as our sale team.

One measure is the size of the ad market. How much marketers are investing in digital? I think it’s over billion TL (Turkish Liras) annually. That includes display, search and social. That’s a big market relative to other markets. Big opportunities for companies… We have to make sure that our products work for advertisers. They see the value and the benefit in our ad products. One of the really important value propositions of Twitter is that; as a marketer you don’t necessarily need to invest in ad products. You set up a handle, you acquire followers and you can market to those followers. You can send them offers, promotions; you can talk about your product launches etc… It’s like free PR tool. But if you want to extend your reach and get your message in front of more users you might buy promoted tweets. The other value proposition of Twitter is – and I can’t think of another advertising platform that can make this claim – the ad products and the organic products are the same. Think about advertising historically… It has always been disruptive. You watch a TV program and you have to watch commercials and the show starts again… You read a magazine but then there is whole page ad between the stories. It’s the same in newspapers too.  Paid search… Sponsored results on top and then the natural results. With Twitter the ad is in it. The promoted tweets are like organic tweets. They are in timeline and they look and feel the same. More sincere for users. We see that in click rates too. The click to rates for promoted tweets is 1-3 percent while traditional display is 0.05 percent; so 20-30 times higher. We don’t need to show as many ads…  while on Facebook the ad coverage is pretty high. It’s either on your timeline or the side of the screen. You see fewer ad on Twitter but the quality is higher.

[quote style=”1″]“The ad products and the organic products are the same on Twitter. Think about advertising historically… It has always been disruptive. You watch a TV program and you have to watch commercials and the show starts again… There are ads between the stories on magazines. Paid search… Sponsored results on top and then the natural results on web. With Twitter the ad is in it. They are in timeline and they look and feel the same. We see that in click rates too. The click to rates for promoted tweets is 1-3 percent while traditional display is 0.05 percent; so 20-30 times higher.”[/quote]

Can you please explain the products?

We have 3 ad products.

Promoted Tweets: Cost/engagement. You only pay when the user takes an action. It’s auction based again.

Promoted Trends: Being in TT list for 24 hours. It has flat fee.

Comparing with other platforms advertising tools how do you define the efficiency of Twitter’s ad products?

It depends on what your definition of efficiency is. I think if you are looking for engagement then Twitter is the right platform. We don’t have the same number of users as Facebook. It’s true in all markets but we are closing the gap. Facebook sells reach.  Whether or not these users saw the ad or interact with the ad; it’s not that clear. Of course the advertisers care about if the consumers saw the ad or not but I think what they really care is if they actually engage with the ad, interact with the ad. Especially with the context of mobile. We are a mobile first company and engagement is physical act. You are touching the ad. I was talking to one of the lead marketing people from P&G a month ago. He said that the engagement on Twitter is the same to them as someone walks in a store and picking up a serial box and looking at it; touching it. Engagement is more important than eyeballs.

Do you think both global and local brands in Turkey use Twitter and its tools efficiently?

We launched in the market less than a year ago. We see good success. They are not only spending, they are also renewing. That’s a good sign. That’s the most important quality metric in advertising. Did they renew and did they increase their spent? For advertisers who have advertised we have seen this so far. A brand message carries more context on Twitter than it does on Facebook in my opinion. The higher engagements we have is the reason that they show on timeline and they seem like regular tweets and etc as I said before. But also I think that there is more openness to interact with an ad on Twitter.

These tools are also efficient in mobile as much as they are on web?

All of the products that I mentioned are available on both mobile and web. We are the mobile first company and majority of our users are on mobile. All our developments start on mobile. The engagement rates are actually higher on mobile. That makes sense. Mobile is more personal.

We have launched a number of interesting product recently. Vine for example… It’s growing really fast. We have already seen many creative examples about using Vine. We have launched keyword on timeline marketing. We identify keywords in people’s tweets and then allow brands to target based on that conversation. If you tweet about coffee, Starbucks is able to target you with an offer. It’s the first time that marketers can actually target a specific conversation.

[quote style=”1″] “We have launched keyword on timeline marketing. We identify keywords in people’ tweets and then allow brands to target based on that conversation. If you tweet about coffee, Starbucks is able to target you with an offer. It’s the first time that marketers can actually target a specific conversation.”[/quote]

Yes but it carries more meaning than someone is searching for a particular keyword. You target the conversation.

Continuing user growth. We have 200 million users. I don’t think we will be focusing on any new product but enhancing the existing ad products. Better targeting, better measurement, moving out better ROI etc will be the second focus. And spending time in different markets, talking to advertisers, marketers to hear what’s working and what’s not. Product development is all in the US so it’s important f for us to be in the market and hear.

What we hear from marketers in Turkey is that targeting is important. They want their messages reach the right users at the right time. At the same time it’s a new product to them. They are still in experimenting and testing phase. They are spending little bit less budget. One major brand starts and everybody will. I wouldn’t be surprised if our penetration for big brands doubles on next year.