At a press conference yesterday, Intel Turkey Country Manager Burak Aydın presented the findings of “Young Turkey Research.” According to the research, for which Akademetre polled 3,000 young computer users between the ages 13 and 29 from 26 cities, digital devices, internet, and social networks have become indispensable to the younger generation.

Aydın opened his speech by noting that, “As Intel, our priority is to bring to light the changing wants and needs of our society through the research we conduct. Without question, the young population is the fastest to adapt this change. By shaping regional, even city-wide marketing strategy development, and guiding R&D investments, researches like this are invaluable to the ecosystem we serve.” Aydın said that, within the 13-29 age bracket, which constitutes 29% of Turkish population, 71.4% live in households with a computer, and 85.5% with a cell phone. In comparison, Turkish Statistical Institute (TÜİK) placesTR cellphone penetration at 93.2%, and computer penetration at 31.8% for desktops and 27.1% for laptops.

Two out of three users sampled think, contrary to popular wisdom, computers make them social. In terms of socialization, the new generation does not differentiate between the time spent with friends and loved ones in a physical environment, and time spent online.

The Turkish youth prefers desktop computers for research and gaming, and laptops for social networks and communication. 40% of them have their own computer, and the number jumps up to 43% in urban areas. Regionally, due to variations in geographic location and settlement patterns, the ownership rate may move up, as it does to 51% in the Eastern Black Sea region, where dispersed settlements are the norm. Desktops, preferred by males, transition to laptops as income level and age goes up. 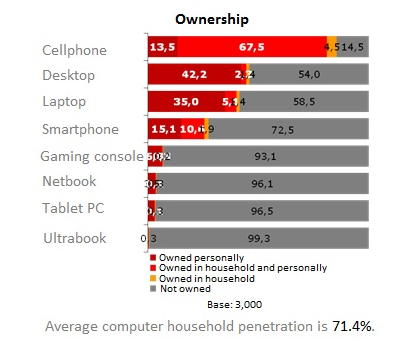 In terms of internet usage, three out of five users enjoy regular access to internet; but the numbers go down to two out of five in rural areas. İzmir has the most internet-savvy population with 79.6% regular internet access, and Van comes last with 15.5%.

Preferred online activities vary from city to city. Banking and online reservations are favored in Zonguldak; the Manisa crowd likes to read news and have video chats; and Gaziantep is all for downloading music and movies. Kastamonu sets an astonishing record in Facebook and Twitter use, with a solid 100%.

In the mornings, 4.7% of those sampled go online before they leave the bed, and 8.3% before visiting the bathroom. Of the 330-minute average time spent on the computer, 228 minutes are on the internet. Eastern Black Sea region again takes the cake with 276 minutes online, with Southeastern Anatolia region in close pursuit at 264 minutes.

The Turkish youth spends an average of 53.5 minutes daily on social networks, and use them as the main platform to disseminate information. In comparison, time spent on e-mail is 18 minutes on average. The most devout users of social networks are those in the 13-17 age bracket; and the time spent on social media decreases as the users get older. The second most popular activity online is playing games, at an average of 42.7 minutes daily, and downloading music and films follows 3rd at 28.2 minutes.

According to the research, a staggering 97.7% of the 13-29 age bracket owns a cellphone or a smartphone. Cellphone ownership in Turkey averages at 81%; and the Eastern Black Sea region takes yet another lead with 95.6% ownership within the sample group. Every adolescent out of five sampled owns a smartphone. Almost half the households in İstanbul own a smartphone at 47.3% penetration, and Aegean and Black Sea regions follow suit.

Intel’s research provides a window into the changing lifestyle of the Turkish youth. Two out of three young users think digital devices are a part of a person’s social status. More than half the young population believes that people who cannot operate digital equipment cannot keep up with the times.

One of the questions in the survey was, given the choice, what the young users were prepared to sacrifice to not part with their mobile devices. As it turns out, men are more enamored with their toys. As social status went up and age went down, loyalty to mobile devices increased. The first things given up instead of mobile devices were food and beverage, shopping, rest, shower, and seeing partners.

The research stumps some stereotypes, as well. Women use the mobile phone a daily average of 104 minutes, whereas men raise the bar to 110 minutes. One thirds of smartphone owners spend at least an hour actively on their device; and the average daily use for smartphones is 128 minutes. Smartphone usage stats reflect the general trend of decreasing use with increasing age.

“Young Turkey Research” reveals that there are ethical considerations and overall etiquette to mobile device an internet use. Female users are more sensitive to these newly shaping norms. According to the research, the big no-noes are talking loudly in public (85.2%), and tagging someone in a photo or location, or divulging similar personal information, without prior consent (82.3%).

This article by Gülen Demirok, originally published in sosyalmedya.co in Turkish, is adapted into English by Süleyman Okan.